Self Guided Walking Holidays
along The Hadrian's Wall Path

A true journey along an historical part of the United Kingdom, inspired by Britain’ s greatest and Europes’ largest, surviving Roman monument, the Hadrian’s Wall walk is considered one of the easiest of the National Trails in Britain and would suit walkers of all abilities. 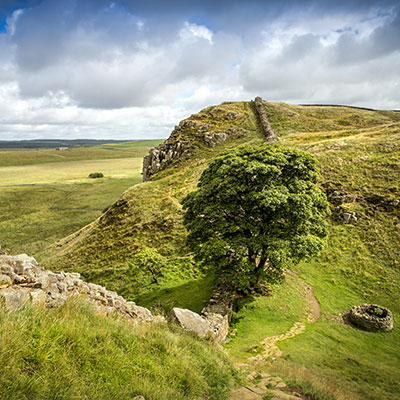 A true walk along the history of the United Kingdom, impressive castles and ruined fortifications are your constant companion as you tread in the footprints of the Roman Legionnaires and the heathens it was meant to deter. Wild and rugged landscapes accompany this amazing adventure, a must do walk for those interested in history and ancient sites.

In 122 AD the Emperor Hadrianus ordered his engineers to construct a wall to hold back the Celtic Barbarian hordes from the North (Scotland) as they were threatening to overwhelm his hold on the northern extreme of the Roman Empire. This momentous task took some fifteen thousand Roman Legionnaires about ten years to complete. Today this UNESCO historic World Heritage site draws more visitors than the Emperor could have even imagined!

At each mile along the wall there is still evidence of a mile-castle with two watch towers in-between. Although over the following years, due to local building needs many parts of the wall have been plundered but the central section remains very well conserved. There still exist remains of various forts along the way, such as Houseteads; with excavated foundations of barracks, the commander’s house, a hospital and even toilets. Birdoswald; situated in a most picturesque setting high above the River Irthing  with remains of turrets , a mile castle, remains of a drill hall ,granary and workshops, also has a fascinating visitor centre.

Starting your 84 mile (135km) adventure on the east coast, by Segedunum Fort on the banks of the River Tyne at the appropriately named Wallsend, which is about 3 miles east of Newcastle, the trail runs as close as possible to the course of the wall. The walk then moves up onto farmland and the wonderful empty landscapes of Northumberland and Cumbria, following below the edges of rocky crags and down remote valleys and with stunning views all around. Stop off at Carlisle, with her magnificent castle and cathedral before heading on the final stretch toward the village of Bowness-on-Solway built on the site of the Roman fort of Maia and bordered by salt marshes, a habitat to many species of birdlife such as oystercatchers, redshank and curlew.

Follow this iconic structure across the border region between England and Scotland, across stunning open terrain strewn with the remains of the work of the legionnaires and imagine what life was like in this rugged land two thousand years ago. With impressive castles and ruined fortifications throughout, it is easy to imagine you are treading in the footprints of the Roman Legionnaires and the ‘heathens’ it was meant to deter.

Although most people walk from east to west following the official guidebook, there is nothing to suggest that walking the opposite direction would be less inspiring. The original thought process was merely that starting in the larger city area of Newcastle and then heading into the countryside would be ‘more natural’, however, beginning in the west would mean England’s prevailing winds would be at your back and  you may wish to celebrate your adventure at one of the many restaurants and bars of Newcastle.

With history every step of the way, a sprinkling of cosy pubs and bustling market towns, combined with a beautiful wild landscape, this walk cannot fail to impress.

Unfortunately, due to the unprecedented demand for accommodation in the UK, the website will not allow bookings giving less than 8 weeks notice.  If you're looking to walk sooner than this, please send us an enquiry.