Self Guided Walking Holidays
along the coasts of Wales and England

The coastal regions of South West England and Wales are some of the most beautiful in the United Kingdom. The diverse and ever changing weather assures that you get to see not only the wildest foam topped waves pounding the shores and cliff faces, but also experience days of walking whilst looking at the almost flat, calm mirrored glass reflecting the sun’s rays across the horizon and the endless miles of beaches, before the sun sets in varied hues of pink, red and orange. Stunning native flowers, trees and plants adorned the pathways, each season bringing its own particular colours, sights and heady scents to create images and memories which will last forever. Every section of both the South West Coast Path and Pembrokeshire Coast Path offer the walker something different as they walk. 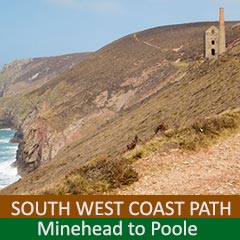 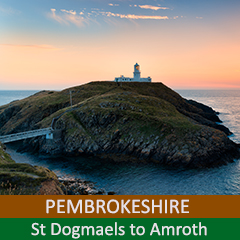 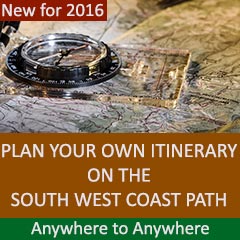 With the high vantage points on the cliff tops you have the best views of the route ahead, along with the sense of achievement when looking back at the route you have already covered.

Coastal walking allows you to visit ‘the edge of the land’, where people have for thousands of years harvested all the sea and the land adjacent to it has to survive and create settlements. Many of these locations have grown and thrived into bustling and busy ports trading with countries all over the world. Some have grown from the necessity of the protection of this realm and have become synonymous with naval history and the growth of the British Empire, in times of war and peace. With the introduction of the railways, the opportunity came for ‘city folk’ to visit these rural idylls, and many towns became a haven for those seeking the chance to clear the dirt of the cities from their lungs and experience dipping their toes in the bracing seas around our coastline with towns such as Lynmouth, Torbay and Weymouth taking centre stage in the era of family seaside holidays.

The necessity to ‘escape from it all’ is not a new one by any means. So when exploring these stunning locations, take a closer look at the woodlands, waterfalls and open fields and take a great big breath and wonder at the nature that surrounds you, as you walk into the sleepy villages such as Clovelly, marvel at the resilience of the people who decided to settle in such a difficult location, and continue to ply a trade with the help of yourself visiting them.

As you walk around St. Ives, take a longer look at the difference in the light and colour that surrounds you, here is the reason the artistic community decided to set up their art school here. Check out the harbours and industrial shipwrights’ yards which spread their way across the Southern coastline from Falmouth to Plymouth and beyond, built from the need to create a navy to protect the residents of this land, as was the need to build the many castles and fortifications along the coastline of Wales.

Add to this, the history of not only the people, but the very ground beneath your feet, with the wealth of geology which presents itself to you as you walk such as Durdle Door, the fossil rich Jurassic coastline, or the limestone stacks off the coast near Castlemartin and you will soon realise that walking the edge of the land is the most rewarding, eye-opening, enlightening and fulfilling experience.

Unfortunately, due to the unprecedented demand for accommodation in the UK, we have taken the decision to extend the period we require to book a holiday from 6 weeks to 8 weeks.

Whilst this does give us time to book your walking holiday, it is essential that you understand the current situation for all 2022 holidays.